We are in Askim, at the Kykkelsrud hydropower plant. The building is old and beautiful – it has been here since the powerplant opened in 1903. Here we saw Bel Horizon,a performance made by the French dance company Le G. Bistaki. The performance is made specially for the building, (curated by James Moore at Østfold Kulturutvikling Scenekunst) using all the great locations both the inside and outside of the powerplant. The performance begins with the audience being led down to the riverside, on the lower side of the building. There we meet several dancers gathered around a table, dressed in cowboy-like costumes. They dance around a table covered in porcelain cups and vases, in all shapes and sizes. Some of the cups are still intact, and the dancers occasionally drink from them, whilst others are broken and scattered around the table. To the audience it feels like we are arriving in the middle of a party.

The entire performance consisted of small scenes and visual pictures, spread around the location. Guides would silently follow us through the path, and on the way, we could witness all sorts of expressions. Some of the visual pictures were filled with attitude, like intense dances or fights between dancers. Other visuals were just moments, often so well made that watching them felt like an absurd dream. An example of smaller moments could be walking past a woman hanging by a rope vertically down from a wall, slowly pouring water out of a beautiful vase. Most of the performance was non-verbal, except a few scenes.

Two of the main elements, that worked like a red thread throughout the performance, were epees -sharp-pointed dueling swords and porcelain vases. The actors played around with the elements, for example in one scene the dancers would come walking in, using the vases as shoes. They did this in the big hall inside building. The use of the vases brought an interesting combination of visual expression and sound. Many of the scenes in the performance consisted of sword fights turned into dances. The actors would throw the swords around, balancing them in every possible way. It was impressive, because the swords were very thin, and probably very difficult to balance.

There was pre-recorded music accompanying the dancers throughout the performance, and the music they used fitted very well with the visuals. Approximately halfway through the performance the guide led us into the building, where we were served warm delicious chick-pea soup. Three of the actors formed a small band playing a couple of live songs while we ate. This was one of the more humoristic parts of the performance. The band was very sympathetic, joking around and playing a self-written song called “Dancing in Norway”- The song had an ironic undertone to it, because in reality Norwegians unfortunately don’t dare to dance much in public.

I enjoyed this performance, because It really brought you into another universe. The actors and dancers were really good at enchanting the audience with their skills, creating visually pleasing picture after picture. In some parts of the performance it had a Quentin Tarantino vibe to it, both in music, costumes and attitudes. Bel Horizon ended outside the building, on a giant bridge leading away from the powerplant. All the actors ran up the bridge, and lit up by glowing lights they turned around, waving back to the audience. The visual picture was majestic, and actually very touching. I would recommend this to everyone, but unfortunately the performance was site-specific, and only played until the 22. September. But check Le G. Bistaki out, their work is amazing – and who knows, maybe one day they make a site-specific show somewhere near you! 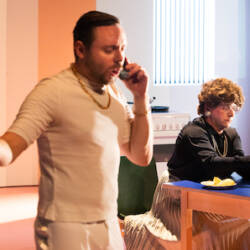 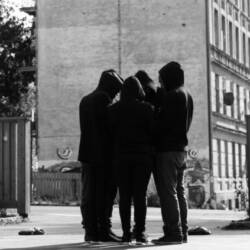